Allee Willis’ Kitsch O’ The Day – Mr. Wah Wah Gets Ready for the Sound Of Soul 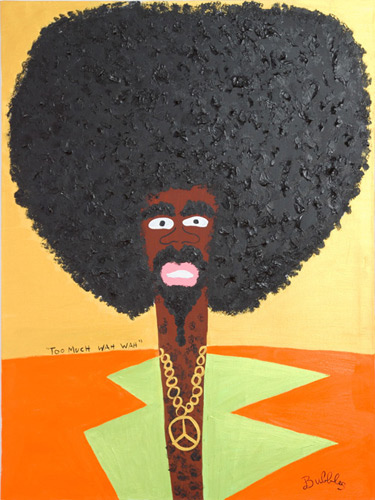 Mr. Wah Wah,  the prized work of Bubbles the artist, has become the symbol of the Sound Of Soul fundraiser I throw every year in conjunction with Pacifica Radio Archives. This year it’s tomorrow and I’m going nuts trying to get ready for 300 people storming my house to eat outrageous soul food from Mom’s Barbecue House, peruse my collection of Pop Soul artifacts that the Godfather himself, James Brown, encouraged me to  turn into a museum when he first saw it in the 1980s, and to celebrate the end  of the first national tour of The Color Purple.  (Second national tour begins in two weeks  with a brand-new production and cast.)

As anyone  knows who’s ever been to a party over here, I treat the whole place like it’s a big set and hand make signs, displays,  games, prizes, the works.   As if that’s not enough work, with all the rain that’s been dousing LA I need a Plan A party, the real deal, and a Plan B party,  the striped down version that happens if it rains and I’m forced to squeeze everyone inside, a physical impossibility that demands extraordinary hive-inducing, Valium-popping-if-I-were-the-type measures.  So I’m a  paint covered, music making busy little beaver today, half in a good mood and half having spilkes because I know powers greater than I are at work to collaborate on the evening.   But with all the hostess concerns that I have Mr. Wah Wah  is still looking good and ready to party!

2 Responses to “Allee Willis’ Kitsch O’ The Day – Mr. Wah Wah Gets Ready for the Sound Of Soul”