I do a lot of different things. I never knew what to call myself. Composer/ songwriter/ lyricist/ musician except I don’t know how to play/ artist/ interactive artist/ writer/ director/ producer/ party captain/ social planner/ technologist/ collector. By most standards totally different hats. By my standards the road to being a totally integrated, self realized individual. By entertainment industry standards a liability until the Internet finally pounded into their thick heads that someone who was self sufficient and capable in more areas than the one they signed a contract in was an attractive pet to have in the stable. With two notable exceptions my music publishers never got why I had the urge to paint, the art gallery owners viewed me as a songwriter who sometimes paints and very few of them ever got that my real artform was the Party, where all my pursuits sloshed together in one interactive swirl of social interaction and finely honed environment.

But now, 17 years after I jumped onto at that time the slow chugging train known as the Internet, the day has finally arrived where you can be whatever you want to be, with as many different talents and interests smashed together as you can manage. You can emerge as a revolutionary force if you just have the balls to offer something different. The tools, information and distribution channels are all there and the former keepers of the castle no longer hold the keys. 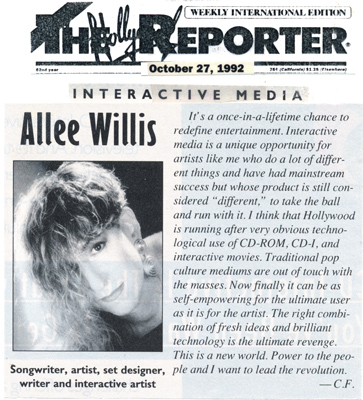 So, the big realiziation is that it’s not the song, it’s not the painting, it’s not the new wall color, it’s YOU who’s the artform. Your hair, clothes, front yard, job, relationship, house, car, friends – they’re all physical manifestations of you. Your life in cyberspace, be it an accurate reflection and extension of your real self or a complete fabrication, is you splatted out on a vast neverending canvas of infinite time and space. You can exist as a little pea in a great big vast black hole or you can fill it with color, shapes, spirit and new friends and push yourself to places you could never dream of going when held to the confines of physical space and laws of the former universe and gatekeepers.

So be bold with the new extended YOU. Only decorate and inspire it with what makes you feel passionate about yourSELF. On physical and virtual planes alike cut out the crap that weighs you down, makes you feel bad, guilty, ugly, fat, jealous, angry and otherwise depressed. You may think that every decision you make is about the thing you’re making the decision about. But it’s always about you – how much you think you deserve, how worthy a person you think you are, what you think your potential is. I’ve always been good about cutting off from dysfunctional collaborators, not taking jobs for money but for the creative high or freedom they will bring. I flip careers like cooks do pancakes. But it’s never been to actually change what I’m doing but rather to evolve into whatever I think I want to be.

The entertainment industry is self destructing from arrogance and greed. They thought the Internet was a place for dorks. They thought no one but highly paid creatives, lawyers and businessmen could create content fit for mass consumption. They missed what the whole revolution was about – empowering individuals with the ability to express themselves. And what spilled out naturally and honestly – cats playing piano, homemade music videos of songs recorded by any means necessary, exploding vegetables, whatever – inflamed the imagination of the worldwide public more than any scripted by committee property ever could.

So, be yourSELF. You’re the canvas. Paint like a motherfucker. Now’s the time.