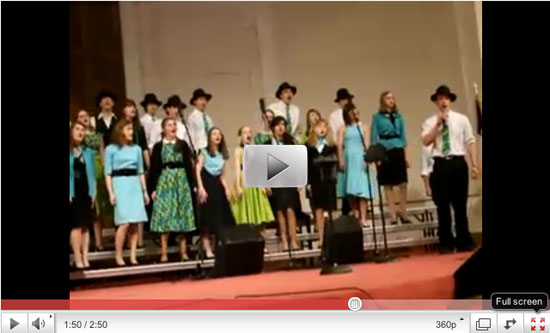 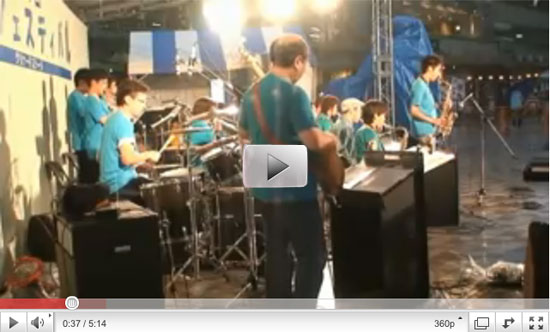 As someone who likes to video as many momentous occasions in their life as possible I’m often in the position of having to set a tripod in inconspicuous spots to capture all the action. I suppose that’s what happened here but I can’t figure out who exactly wanted their action captured as the most predominant  documentation we get is a nice view of a balding head. I’m going to place my money on the drummer though, who plays the most curious rhythm on his sticks before they actually hit the intro cymbals.

Even if not played so spectacularly, a song like “September” has a tremendous amount of energy. A lot of times in songs that exhibit less energy, musicians add modulations in expectation that it will drive the pulse higher and higher. The Funny Fellows Jazz Orchestra of Tokyo wastes no time getting to the modulation!  This is one of the only times I’ve ever heard a modulation occur in this song (or any) before the verse even begins.  All else sails along in good Big Band  form though it sounds like some of the horn players may have snuck a little nip before the show. 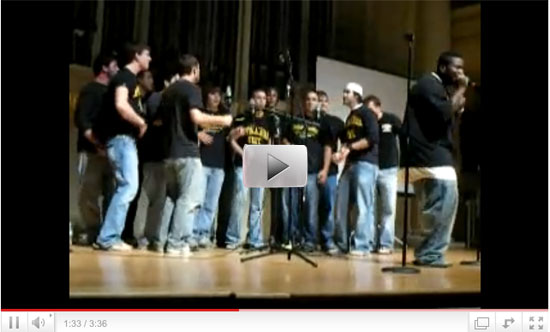 One of the more spirited accapella versions by ASU’s Higher Ground at Elon University’s ACAPPALLOOZA 2007, albeit earbending at times. I was going to attribute some of the flatness to bad monitors but the longer this went on the more seasick I got until my head was one big swirl of sloppy muck.  Then I read some of the comments and the lead singer confessed he was indeed “a l’il tipsy”.  I think he shared some of that tipsy with at least a couple other of his fellow Acappalloozains. So grab some motion sickness pills and earplugs and enjoy! 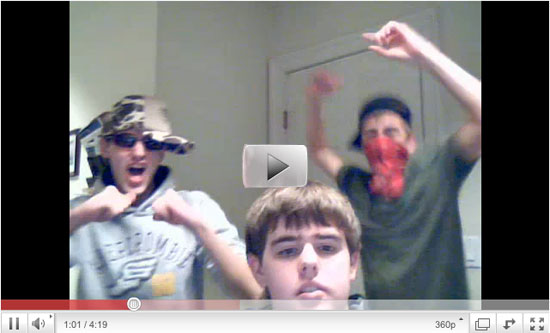 I’m always happy when my work inspires folks to take on their own creative endeavors. But in this case, the spirit of my song, “September”, just might have inspired a little too much confidence in three college boys out to make a concept video. I get the fact that the guy in front suspects something is going on yet somehow misses that there are two (bad) dancers prancing behind him, but as storytelling goes this sinks like a tugboat loaded with cement. I especially love that the dancers often duck prematurely, even before the guy in front turns around to discover nothing. And sometimes the music just mysteriously stops. Best is once the innocent in front leaves the room so that the guys don’t have to mime anymore, one of them continues to silently mouth the song. Once it turns into a full-blown dance off, I can’t say I would be awarding any prize other than to advise them that their allowance money ought to go towards a new mic. Without question, the best part of this video is the toilet paper covering the door of the room across the hall. 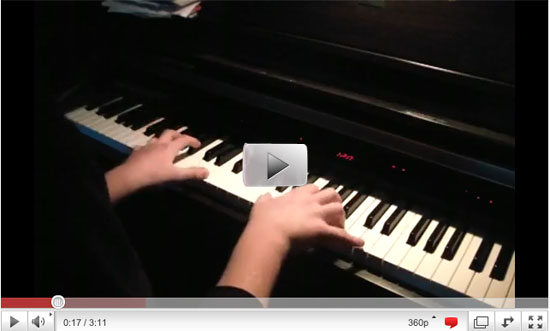 If for no other reason, this is fantastic for the player’s voice announcing what he’s about to perform at the top of this ‘2groovy postparody :D’ vid.  CharisC22 indeed plays a most spirited version of my first hit, “September”.  I seriously love how tinny his keyboard sounds and how heavy he lays on the pedal as if Bigfoot is in the band. The brief narration noting the shift in mood at 2:11 slays me and the 60’s-Sondheim-kind-of-staccato-ishy-little-chord-juts-that-someone-like-me-who’s-sold-50,000,000-records-should-know-the-musical-term-for is outstanding as well.

The kids at Fairview High do a noble job of singing and a much more ambitious job dancing than a lot of other high schools I’ve seen do “September” on Youtube. But, as the Grand Pooh Bah of Kitsch, the standout for me is the performance by the horn section.  Either someone didn’t do their homework before they came to band practice or they’re just plain tone deaf. What it really sounds like to me is that the horn players got the big riffs down after the choruses and just figured they could coast through the single note accents. Which would have been fine had they managed to find the key. Far be it for me to not encourage someone to go farther in music because they’re un-schooled. I still don’t know how to read, notate or play a note of music, including “September” and anything else I’ve written, so I’m all in favor of doing it just for the love of it. I’m just sayin’, the horns are a standout, wayyyyy stand out. 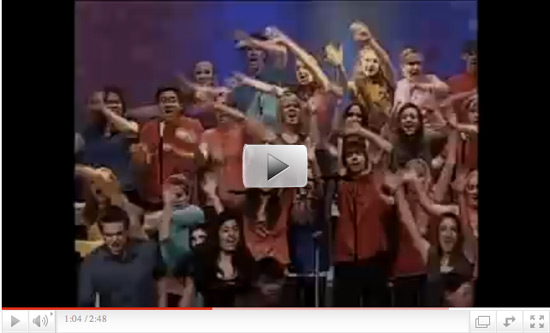 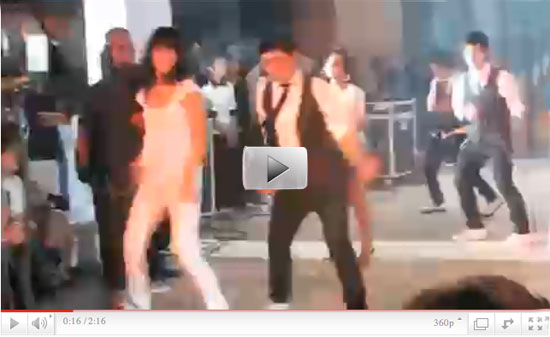 The Vertigo inducing ‘can I offer you  some strobe?’ lighting  and overuse of a smoke machine provide the perfect environment for “Margarita and the boys”,  some of whom are clearly girls, to dance to “September” on this, Day 4 of the 365 day YouTube marathon. In searching for people “borrowing” my song “royalty free”,  I can’t believe how many line dances there are to it. I always thought line dances were for country songs but now I know that line dances are for happy songs.

How happy am I that neither rain, sleet nor snow could keep the Kennett High School Marching Band from playing my song, “September” back in January of 2007?! I’ve been especially aggressive tracking down marching bands playing “September” as in a couple of weeks I have the great honor of conducting the University of Wisconsin marching band at the Homecoming halftime game when they play three of my hits, “September”, “In The Stone”, an Earth, Wind & Fire song that has grown to mythical proportions in marching band repertoires, and ” I’ll Be There for You (the theme from Friends)”, which I have no idea as to why it’s on the program when “Boogie Wonderland” or even “Neutron Dance” would seem more appropriate to drum the spirits up for the big game. 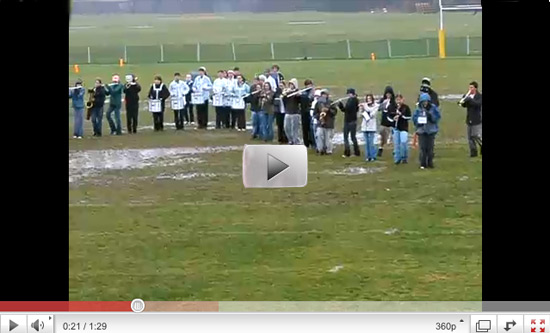 Despite the fact that I (co) wrote everything, I can’t read music and thought that maybe if I watched a few marching bands play the songs it might better prepare me as these arrangements always differ slightly from the records.  I’m  not sure how much I can really learn from the Kennett High band other than to always wear galoshes in inclement weather and to remember to practice so I can hit the notes. I will say that the rain makes an excellent percussive intro.