I’m The One Who Needs Oxygen 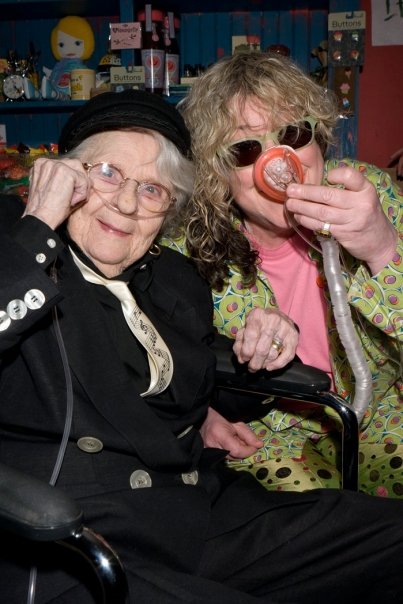 64,000 YouTube views and counting since the “Hey Jerrie” launch party a few nights ago at Ghettogloss that I should be blogging about right now instead of writing this. 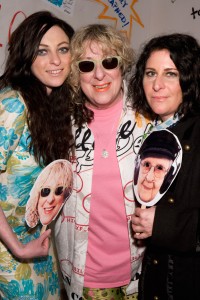 If you follow this blog at all you know how I am. I know any decent blogger or social networkist posts photos and videos immediately. But for me, documentation of an event is an equal part of the art the event was thrown to celebrate. So before I can post anything I need to find the right place for said documentation in the organic ball of goo that is “Hey Jerrie” or any other piece where my music, art, video, animation, technology and a party converge into the octopus-like formation known as “my art”.

I can deal with the photos, though writing captions makes me feel like a Roto Rooter is sucking my blood out. But I did manage to go through them and despite the fact that the shots are mostly posed so the craziest spontaneous moments, the ones that make the party ‘THE party’ are nonexistent, you may go here to see them. But make sure and come back.

Now going through party videos so I can get some stuff up online quick is another animal entirely. I’m conditioned to being terrorized by camera people who don’t capture any of what I’m experiencing and instead concentrate on such tight close ups I may as well be talking to myself at a party of one. If my wrinkles were what I wanted to see I could have just stayed home and looked in the mirror. Besides, transferring 16 hours of footage from three cameras and archiving it so it can be found in the glut of 42,000 terabytes known as my server demands I enter the proper brain space – blissful peace meets mob mentality – and I’m just not there yet. So instead, as process is the most interesting thing about creating art to me, I shall regale you with how it got to the point of “Hey Jerrie” being the 34th most viewed video in the world on YouTube just 36 hours after its release and, just as important to a kitsch freak like me, how it became “the most responded to video EVER” in Hong Kong.

(If you have no knowledge whatsoever about my rendezvous with Jerrie Thill, the 91 year old female drummer on an oxygen tank and primary star of “Hey Jerrie”, read my previous posts on her (of which this will appear first so scroll down). If you are familiar with HJ or if you’re too lazy to catch up on the posts, which I certainly would be if I were reading this, please continue.

When I first met Jerrie a few months ago I invited her over because I thought she’d enjoy my collection of Atomic 1950’s, 60’s and 70’s Kitsch, much of it music based from an era when she ruled the drum thrones of clubs in LA. But as our date drew near it dawned on me it would be stupid not to record her. It’s not like she could just run down the hill if I got a good idea for a song.

I had no interest in capturing Jerrie playing her standards like “When You’re Smiling” and “Route 66”. Anyone could do that. It had to be one of my songs for me to truly be interested in doing anything with it. “Neutron Dance”, whose bass line was a calculated 50’s jazzbo rip, felt vaguely appropriate. But at the same time as my gut was telling me to write something original I was (foolishly) swamped with The Stallionaires. I also hadn’t written by myself in years so I just prayed the music muse would arrive sometime before Jerrie rang the bell.

Two days before she came over the melody hit me getting off the 101 at Highland. As is a nasty mental habit of mine, some of my simpler stuff, songs that ultimately catch on the quickest, seem dumb as I’m writing them. “Neutron Dance”, which I won a Grammy for as part of the Beverly Hills Cop soundtrack, was definitely one of those. But now I was just looking for something sing-songy that would be easy for Jerrie to drum to. So I decided to commit to the melody stuck in my head long enough to write the lyric.

Although I’ve written both the music and lyrics for 90% of my songs my lot in life has been to be thought of as a lyricist, probably because I wrote with so many male groups like Earth Wind & Fire and the assumption is the female’s there for the lyric or perhaps it’s the fact that I don’t know how to actually read, write or play music. When it’s really flowing, music and lyrics arrive in my head in one tight package. The words “Hey Jerrie, put on a show” spilled out spontaneously with the melody. By the time I passed The Hollywood Bowl at the end of the freeway  exit I had the entire first verse:

Hey Jerrie, put on a show./ You play them songs everybody knows./ Beat them skins and keep it in time./Ya make me loose like a bottle of wine when you beat!

Sing-songy, not going to win a Pulitzer prize but it had Jerrie’s zippy spirit written all over it.

The next couple of nights I wrote 36 different versions of verses, choruses and chants. I recorded the beat in my head by playing one drum at a time – I have no idea how someone plays different things with different hands let alone gets their feet synchronized – but even a pathetic little temp track would make it easier to sing the song down to Jerrie when she gets here. I constantly change the lyrics as I sing it down.

D-Day arrives. As soon as we hear the car pull up with Jerrie, Allison Freebairn-Smith who introduced us, and Carol Chaikin, Jerrie’s sax player, my longtime assistant Dina, who started out working my parties in the late 80’s, became my cleaning lady in the 90’s and graduated to chief assistant/ videographer/ keeper of the house in 2003, starts shooting. By this time it’s dawned on me I need to capture some decent stuff in case the song is actually any good and I might want to do a video. So I shoot Jerrie and Dina shoots both of us. 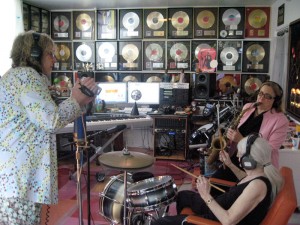 It’s then I realize I’m going to have to deal with the sound of the oxygen blasts that shoot into Jerrie’s nose every few seconds as they’ll be audible in the live recording. I can’t yank the tubes out for 3 minutes or we’ll lose the drummer. So I decide to time the song to the little puffs. I believe it’s the first time oxygen has been used as a percussion instrument and this makes me very excited.

Jerrie does the song in one take. The sound of her kick drum slays me. The weathered, muffled thud sound I had always lusted for.

So I end up with some dark cramped footage and a song that’s starting to sound like it could be something. Carol adds a few takes of sax and flute but the fact that I don’t play, despite hearing every note in my head, has me concerned about how I’m going to finish the record.

The next night I go to see a friend of mine’s 10 year old kid who’s playing Blues guitar at Genghis Cohen. I am definitely guilty of telling someone I’m really interested in hearing their kid play or sing when in truth I’d rather be having my toenails pulled out without anesthetic. All parents, at least the good ones, think their kids are tremendously gifted in their artistic pursuit. If I had the guts, I would tell them to save their money as the kid’s talent is usually hovering in the local telethon area. But this was someone who had recently started coming to my parties who I wanted to keep as a party guest so off I went on a Saturday night to see the 10 year old who I thought was going to put me to sleep.

Lo and behold, Milo Sussman was a mofo. Total Chicago Blues chops and attitude mixed with endearing naivite. By the second song all I could think was 91 year old, 10 year old and me plopped somewhere in the middle. As if 91 years old and an oxygen tank wasn’t enough, that’s a hook!

After the show the mom tells me her 6 year old is as good a drummer as Milo is guitar player. I book them both and they come over twice after school to lay down guitar and add to the toms and two fingered keyboards I’ve played on top of Jerrie’s track. I video every inch of this as well, still no idea how to make anything that looks like something other than a home movie of the sessions, of no interest to me whatsoever. And the kids footage is full of parents and bad lighting.

I’m tortured by the prospect of a dull video. I want people to know about this woman who’s been beating the skins since the Capones saw her play sax and drums in their clubs while her parents ran bootleg liquor for them. I decide to scan in all her dust-crusted photos. At least I know how to make those come alive. If something cute enough happens maybe that will be a starting point. I also decide to bring Jerrie back, clear everything out of my living room and roll around in an Aeron chair like it’s a dolly so I can get longer and brighter shots than the cramped-in-my-bedroom-home-studio footage I have thus far. 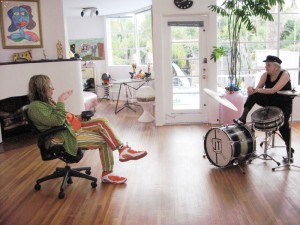 One of my favorite records of all time is Ramsey Lewis’ “The In Crowd”. Very loud partygoer crowd sounds surrounding that great piano playing and Maurice White’s record debut as an artist. I call up a bunch of my friends, some of whom can’t even carry a tune, and make them come over to clap and sing along. I forget to tell them I’ll be filming so the combination of no make-up, ugly clothes and, due to cramped studio conditions, footage of mostly shoes and backs of heads, makes the video aspects of “Hey Jerrie” seem even further away. 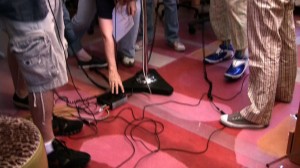 That’s when it hit me I had to throw a party. Which is where this whole blog started…

As I stated earlier, though I’m a natural writer I’m not a natural blogger. I mean I actually love to blog. But I hate to blog just as I hate to write when I’m blogging just to blog. So now I’m really into telling you the rest of the process of making “Hey Jerrie” and it taking off on YouTube the second it arrives there. But if I continue doing that now, with the video and party process still to go, you will be here the better part of your week. And the idea of having material for imminently future blogs is exhilerating to me. Maybe even a tweet or two!

So I’m calling it for the night and will pick up on the rest of it in my next posts. In the meantime, please enjoy the party photos. To make your experience more authentic the main meal items at the party were Twinkies, Ding Dongs and Pixie Sticks. So if you have any of those around you may want to start chewing now.