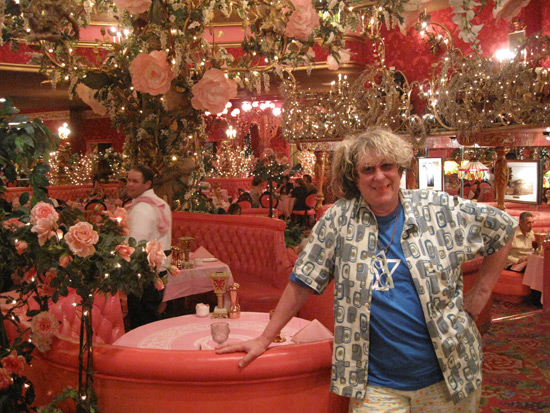 Yesterday, me and Mark Blackwell, who I work with, drove back to LA from up north in Sonoma where I was working with Pomplamoose. As I had raced through the last 48 hours to drive up there with a van full of props so we could shoot our “Shbaby” video, unloaded everything, danced and carried on like a lunatic for the video for much of the time, wrapped, re-wrapped and repaired  instruments I had made out of foamcore, many of which weren’t happy taking the trip, singing and finishing tracks for another song, “R U Thinking”,  finalizing our “Jungle Animal” video, racing back and forth to the hotel where someone who weighed at least 400 pounds was very fidgety in the room above me both nights… as all this was crammed into a less than 48 hour period I was drop dead T-I-R-E-D when it was time to head back yesterday morning. 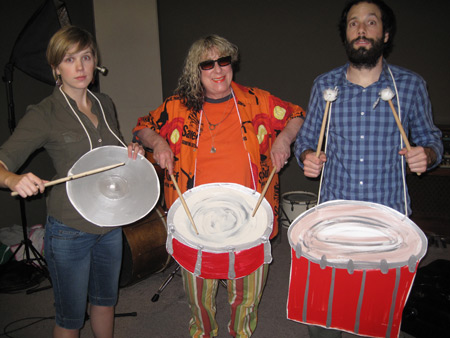 The plan was that Mark and I were going to take a very leisurely drive down a very peculiar route back down to LA so we could see all these kitsch attractions we had never seen before. But the morning started out with me discovering that my trustee MacBook Pro had finally died. Dead as in completely, totally, this-is-going-to-cost-you-a-lot-of-money DEAD. At least I still had my iPad but this too had been giving me trouble like refusing e-mails from certain of my e-mail accounts, not retaining saves after I took copious notes, and the dictation program working as if I was speaking in Chinese. I also had my two iPhones, both of which are very early versions of the phone, and if you even look at either one of them funny the batteries instantly drain. Now I am someone who is very technology dependent. I’m also a gadget freak. The only way you ever see me with one of anything is if the mate had recently died and I hadn’t had a chance to replace it yet. But here I was miles away from home with a heap of scrap metal technology with a blog to get out and a social network to attend to before we even packed the van.

After an hour delay, we were on the road, whipping through towns I’ve never heard of where the temperature was inching towards 110° in a van with malfunctioning maintenance messages flashing on the navigator every 20 minutes, not to mention I’d had very little sleep in the last 36 hours. Not necessarily the set up for Allee taking a nice, relaxing drive home. We decided to take highway 99 that intersects the 5, a fast but excessively dull drive that puts you in LA from San Francisco in five hours. The 99, on the contrary, takes a couple more hours as it swings way east. But it hits the 5 again down past Fresno so there didn’t appear to be much to lose. Other than we didn’t count on a fire breaking out on the Grapevine, a brutal section of the 5, when a big rig overturned and spilled  hundreds of thousands of carrots across all four lanes and somehow ignited a fire. Which then sent us on one of the wackiest and lonnnngest  detours I’ve ever taken, changing what could have been a six-hour trip into a 14 hour pilgrimage and putting us home at 2 AM.  Here we are passing one of the trillion or so tankers that reflected the 110° heat back to us as we made bandannas stuffed with ice cubes to stay cool: 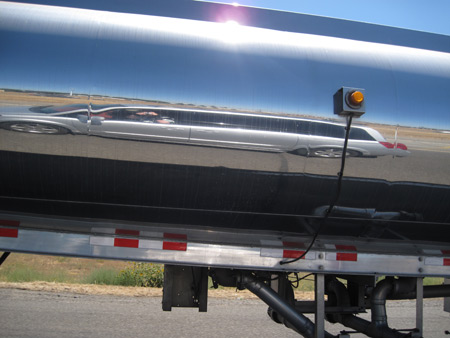 Thank God, before we realized we would be taking a trip of such epic proportions we passed this building off the 99 which at least fulfilled our dreams of seeing some kitschy sights. Unfortunately, there weren’t many of them but this is a bulldozer building that I would love to call my own. We finally pulled into a town called Atwater that looked like it might have some interesting possibilities after three consecutive motel signs led us to believe that perhaps the town was untouched by time. 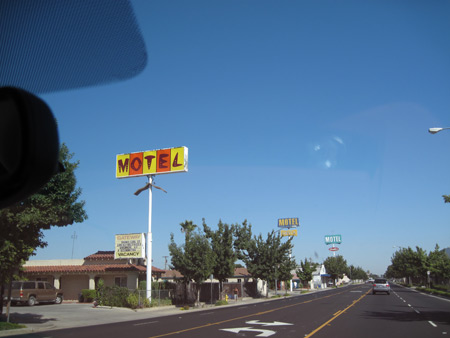 But it hit us almost immediately that time had, indeed, marched through Atwater and there was really nothing outstanding in the way of vintage or kitsch. I’m sure the Atwaterians see this as progress but we were bummed. Especially as this city has the longest traffic lights in history. I could have done with having more to see than a Marie Callendars on the main drag where we were for all most 15 minutes after two agonizing long lights and the longest train I’ve ever seen in my life.

A waiter at Marie’s told us how to cut over to the 101, something we realized we had to do it unless we wanted to sit in a steam room breathing in carrot scented smoke in a traffic jam of  legendary proportion that is a signature of that part of the 5 – there are signs at both ends of the Grapevine that recommend you turn your air conditioner off because the grade is so steep it kills cars. So we took the 152 to jump from the 99 to the 101. 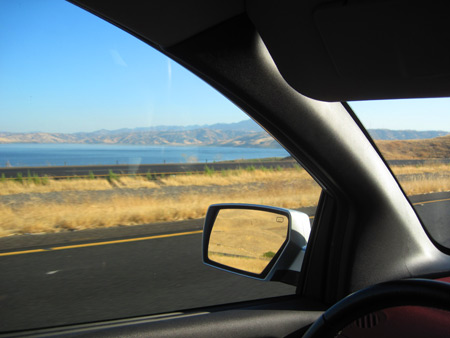 For a minute there it seemed like the beauty of the 152, passing through towns and circling a huge reservoir, was worth adding a couple of hours onto our trip. But when the 152 finally dumped us back onto the 101 it was an hour plus above Monterey, as if we’d driven in the shape of someone who was smiling hard and ended up wayyyyy north, six or seven hours still to go to make it to LA and we had already been in the car for six hours. A straight route down the 101 and 5 from Sonoma would have had me home an hour ago.

But there was one thing and one thing only that put my head in a better space. A few hours down the 101 was The Madonna Inn, a masterpiece of  kitsch. No, that’s not saying enough, the Sistine Chapel of  Kitsch, nestled right next to the 101 in San Luis Obispo.  If we drove fast enough, the dining room would still be open and sitting in the midst of this I don’t care if they served me a tin can I would be happy. We were very happy indeed sitting in the Madonna pink deliciousness and all that accompanied it. 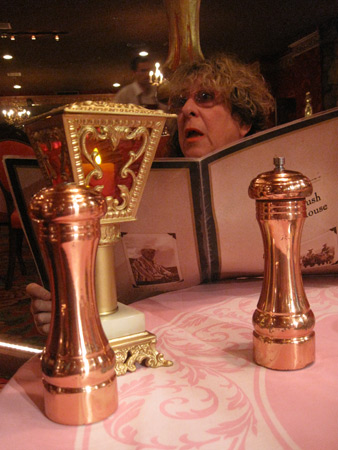 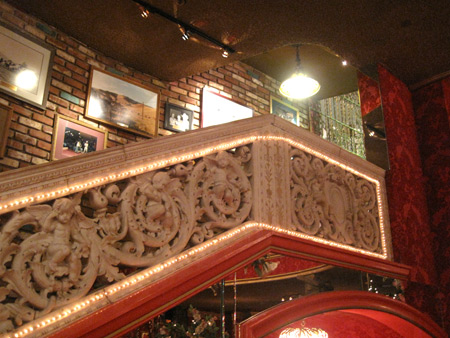 And after eating this classically American meal… … I got to take my hopefully last bathroom break here before I arrived home in hopefully 3-4 hours: And then there’s the 100 uniquely themed rooms, no two alike, with names like California Poppy,  Canary Cottage, Edelweiss,  Jungle Rock,  Imperial Family, Pick & Shovel and about 100 more in the hotel itself.

I would like to thank The Madonna Inn for coming to the aid of two road weary travelers after a couple intense days of incredibly great music and one day of the most circuitous trip I’ve ever taken. I would have wished for there to be more to see along the carrot/diesel-fumed detour we were forced to take but all in all it was an incredible three days. So also, thank you, Pomplamoose… … and thank you, Mark, for driving every inch of the entire trip… … and, once again, thank you, Madonna Inn, for adding a bit of sparkle to an otherwise exceedingly lonnnnnnnnnnnnnnnnng, hotttttt day.