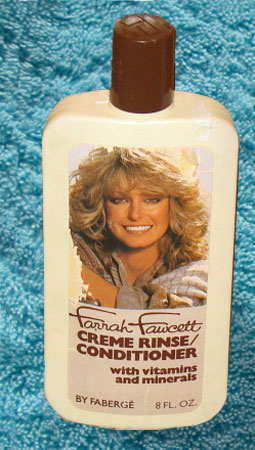 Anything that took off as fast as Farrah’s hair did when Charlie’s Angels debuted in 1975 – 80% of females on earth immediately sheared their manes into replicas – insured immediate Kitsch Kollection status for all products released in association with the legendary locks. Although no one’s hair could have been further from Farrah’s than mine, I bought this bottle of Farrah Creme Rinse/Condtioner by Faberge the day it hit the shelves in 1978. I never intended to open it but a tragic haircutting mistake forced me to pop the cap and see if its magic powers worked.

This was in 1983. I had finally decided to chop down my middle-of-the-back length hair and the hairdresser, who I had never been to before, chose to give me a Farrah. Unfortunately, this was years past when it was hip to have all the little feathers and wisps that marked that haircut. Appalled that my heretofore trademark long curly hair was replaced with such a dated and and, at that point, conservative look I tried the conditioner praying it would somehow force my hair to match my head as well as Farrah’s matched hers.

When that didn’t work I locked myself in my house for thirty one days and every day cut a little more off one side of my hair thinking I would stumble on the ideal length and then cut the other side to match. As anyone who’s seen me in the 26 years since knows, I never committed and the lopsided experiment became permanent. Sometimes I read where people describe my hair as 80’s asymmetrical but to me it’s Farrah asymmetrical all the way.

Years later I met Farrah at a mutual friend’s house. She was really funny and incredibly nice. When she told me that she loved my hair I regaled her with the story of how it came to be. It made the biggest hair trauma of my life all worth it because I got to discuss The Farrah with Farrah. 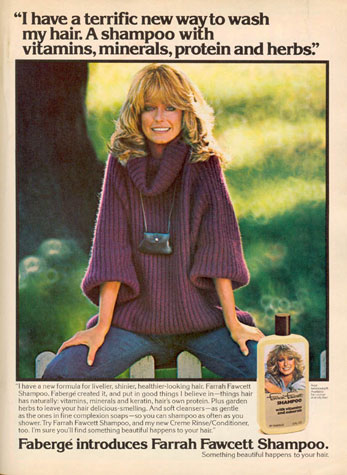 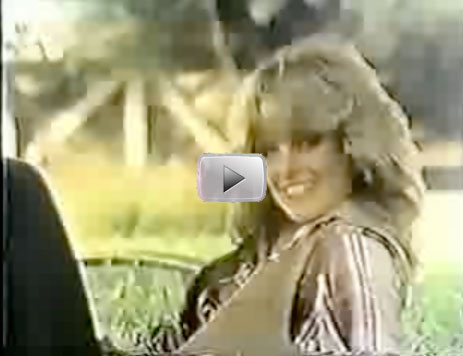