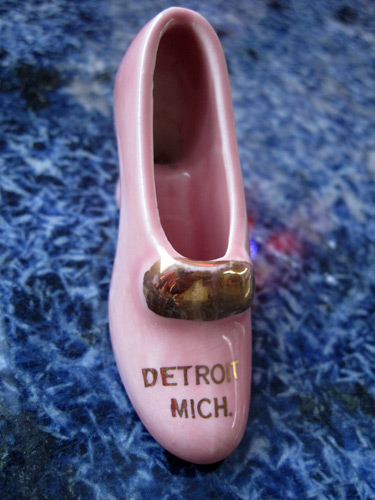 When the post I wrote for Time Magazine‘s wonderful Detroit Blog was published yesterday, my love for Detroit escalated even higher than the sky-high affection I already had for the city I grew up in that still inspires just about every move I make. Despite whatever you might think of Detroit for anything you may have heard about it’s slow and agonizing demise over the years, it’s still the Soul capital as far as I’m concerned and a city that has the potential to lead us into the future this century as it did much of the last. As anyone who’s half evolved knows, when things fall apart it becomes a ripe breeding ground for rebirth in new and magnified ways.  The revolution is coming and it’s already arrived in Detroit. My love letter to my city is here. 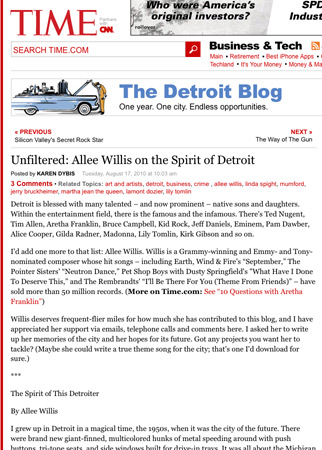 I’ve always collected kitsch souvenirs from Detroit. I have everything from custom painted Detroit bottles to can openers, pot holders, funeral fans, miniature cars, notebooks, pencils, rolling pins and more. But this little unassuming shoe has always been one of my favorites. 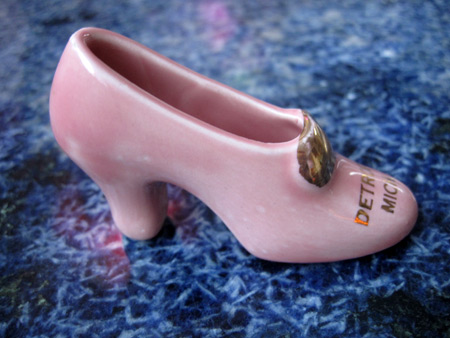 As small as this souvenir high heel is, only 2 1/2 inches long, it’s as giant in stature to me as the old 25′ x 30′ x 20′ stove that sat out in front of The Michigan State Fairgrounds for years on Woodward Avenue. I used to drive by it every day and wonder if I would ever learn to cook. The answer remains no. 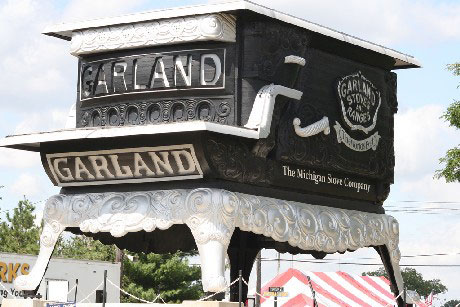 And then there’s the giant tire that started life out as a ferris wheel at the ’64 New York Worlds Fair and was then moved to the side of I-94 where it still sits to this day. I’ve had better success with tires than with cooking though not as much as with shoes. 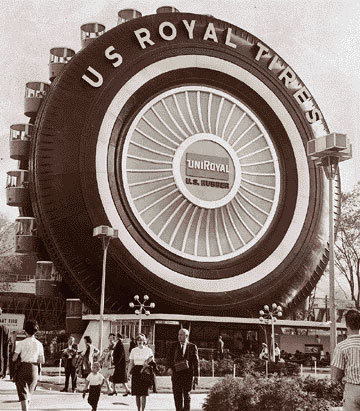 Detroit is a city that many may have lost faith in, a shrinking blip on the map, no longer looming above the horizon of hope like a massive stove or tire. But the naysayers should remember that spirit and strength are qualities that lie inside and, when nurtured, can bloom in the most unexpected places and ways. All it takes is the brains and balls to stay the course, and the belief that change is the one constant in our life and that it can be steered like a big giant-finned Caddy to a better place if enough people just believe that can happen.  People from Detroit have always dreamed and given the world some amazing gifts – cars and Motown for starters.  So I have faith that whatever comes of the ashes of Detroit will be great. It may just look like baby steps now – afterall, the shoe is tiny – but get outta the way because wheels are turning and the footprints that will be left are BIG. 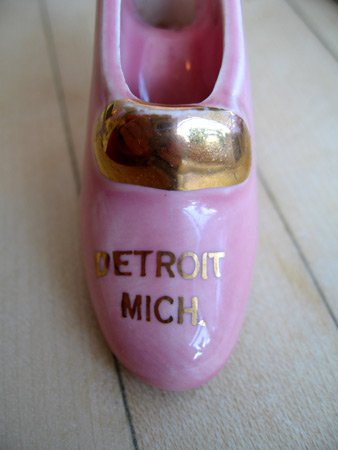