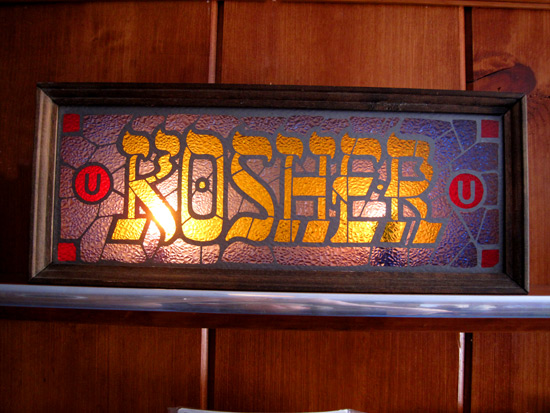 One of the most festive nights of the Jewish year is the ‘breaking of the fast’ meal after Yom Kipper, a veritable smorgasbord of chopped liver, corned beef, brisket, potato latkes, noodle kugel and whatever else there’s room for on the table.  Trust me, after not eating for 24 hours the Chosen People are hungry! Although this “kosher” sign hangs happily at Willis Wonderland, mine is not the house that one wants to eat at on a night such as this.  As such, I’m very lucky that I have a Break-The-Fast itinerary that I stick to like schmaltz (chicken fat) every year and head over to four hamish (friendly, folksy) friends whose houses are are stuffed with machers (big shots) and even some meshugehs (crazy, nuts people) to schmoose with (talk socially, network) while we nosh (eat) like chazzers (pigs).

For our first stop, Prudence Fenton and I hit Marla and Jeff Garlin’s house. You know Jeff from Curb Your Enthusiasm. 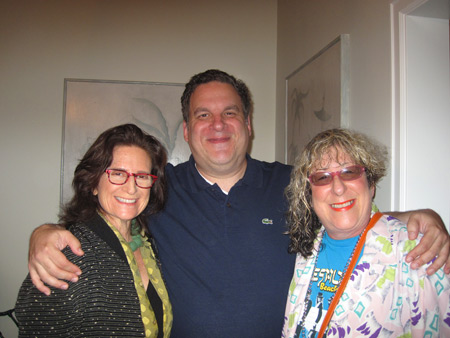 Sadly, I have no photo with Marla, probably because I was too busy fressing (pigging out) every time she was around. It is so NOT KOSHER to only take a photo with one of your two hosts… 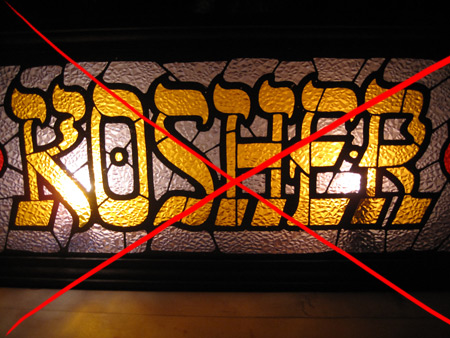 Sometimes the baleboosteh (mistress of the house) serves you bagels and lox and sometimes there’s some nice deli platters. But if Az a yor ahf mir (you should be so lucky) to be invited over to the Garlins to replenish your pupik (stomach) after it’s 24 hour lockout, the shtetl (village or small town) sitting on their dining room table includes corn beef, roast beef, turkey,  three kinds of noodle kugel, mac and cheese – thank you for that extra goyish (not especially Jewish) bonus – bagels, lox, cream cheese, cream cheese with chives, three kinds of sliced cheeses, tomatoes, onions, dill pickles, black olives, whitefish salad, tuna salad, egg salad, fruit salad, salad salad, coleslaw and that’s just how far I got down the table before my plate was full. 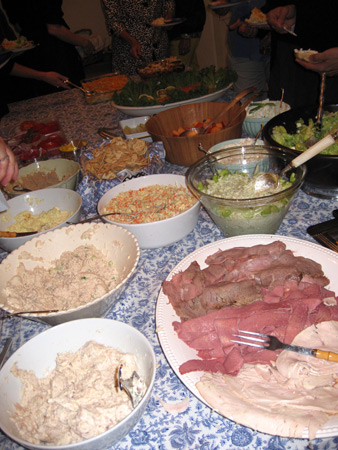 More noshes (snacks) were still coming out when we had to leave after a couple of hours because we had another simcha (joyous occassion) to schlep (get) to. 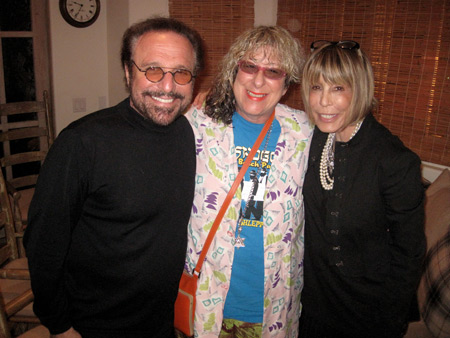 Not only are they real mensches (people of integrity and honor), they’ve written some of the biggest gelt (money) earning songs in the eretz (land). For forshpeiz (appetizers): “You Lost That Lovin’ Feeling” – the #1 most played record of all time, – “On Broadway,” “We Got To Get Out of This Place”,”Uptown” and hundreds of more titles everyone would agree are HIGHLY KOSHER. 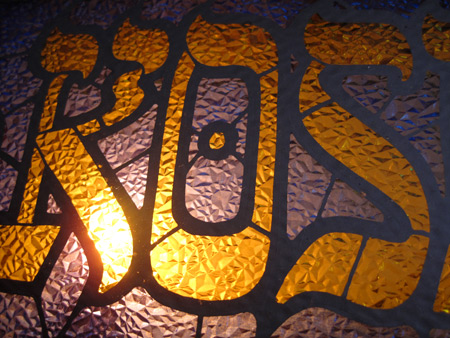 In 1992, Barry and Cynthia were over at my place for a distinctively non-kosher meal when they came to a simcheh (joyous occassion) where I asked guests to come dressed matching their potluck food. They brought and came oysgeputst  (dressed up) like Blackeye Peas. Although I was already too stuffed from the tsegalt zich in moyl (melts in the mouth, delicious, yummy-yummy) meal over at the Garlins, I did manage to kibitz (fool around with) with another songwriting maiven (expert, connoisseur) at Barry and Cynthia’s, Mike Stoller. 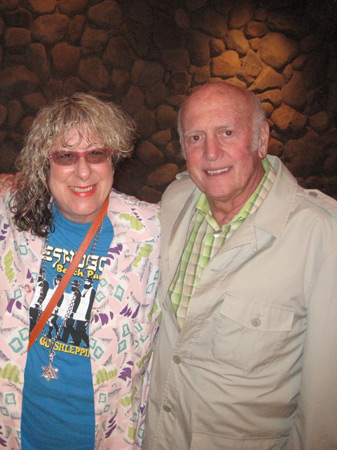 Mike Stoller is truly a KOSHER TO THE MAX songwriter, a choshever mentsh (elite and respected man of worth), one half of the rock ‘n roll dynasty team of  Lieber and Stoller.  If you’re going to write songs and you’re not Barry and Cynthia and you don’t want to chop your hair off on one side and be me I would suggest being Mike Stoller. A few of his early megillehs (big deals) include chachkes (little things) like “Hound Dog,” “Kansas City,”“Stand by Me,” “Charlie Brown,” and “On Broadway”, written with Barry and Cynthia. Mazel Tov (good luck has occured)!

All in all, I had a very frallech (fun) Breaking of the Fast and rolled home feeling like a big happy kishka (stuffed intestine).  We didn’t dance the Hora (traditional joyous Jewish dance) but we carried on like we were boogieing in the Borscht Belt (Hotels in the Catskills with Jewish entertainers and clientele) on the ultimate KOSHER evening of all kosher evenings and one from which I’m still plotzing (exploding from excitement, as in “You got us tickets for Barbra’s comeback concert?? I’m plotzing!) 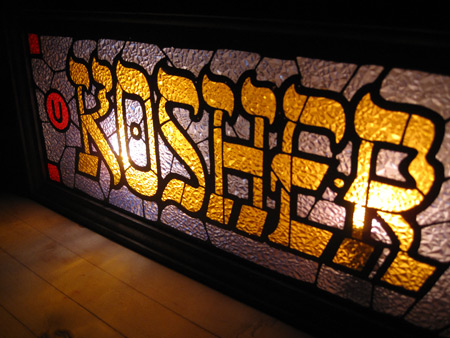