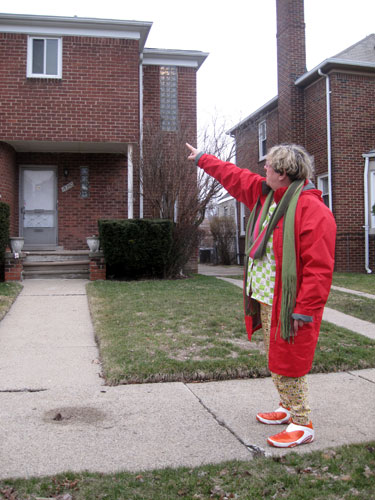 I know… I promised that Part 3 was going to be about finally getting into the house I grew up in on Sorrento Ave. in Detroit after trying for the last 46 years. But, as someone who’s conscious of her evolution and creative process every waking moment, this finally-going-home experience was BIG for me. Also, it’s not like I can go posting detailed photos of someone else’s stuff, which is inevitable if one is photographing a room. So this isn’t so much about documenting the actual house as it is about what I felt like being back in it.

I remember when I finally went to Disneyland for my 50th birthday, after I had only been there once when I was 14, I was shocked that everything was so small. The same thing, of course, happened when I walked into the house I lived in from 5 to 16 years old last week. It was like walking into a dollhouse. Like here’s me with the banister that in my head was a giant slide, down which I rode every morning en route to breakfast:

The house now is, of course, filled with other people’s stuff and taste, but it still had the same soulful vibe I was aware of even back then. Here’s the living room corner in 1961: 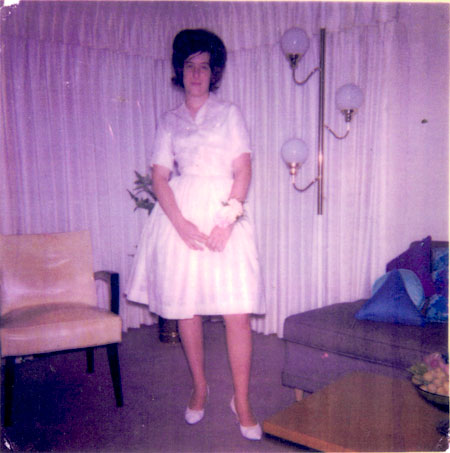 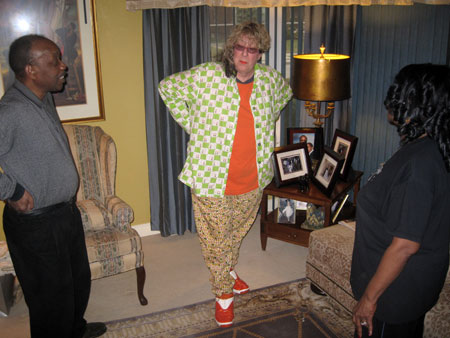 Thank God I finally got out of those heels and into more comfortable shoes.

My shoes were also very comfortable in this photo taken in my driveway around 1957. I remember testing my penny loafers on my pink and gray Columbia bike against other shoes I had for the firmest peddle grip. 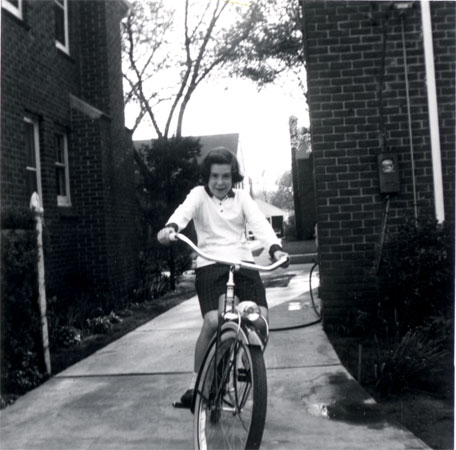 Albeit slightly worse for wear, the driveway remains intact today. 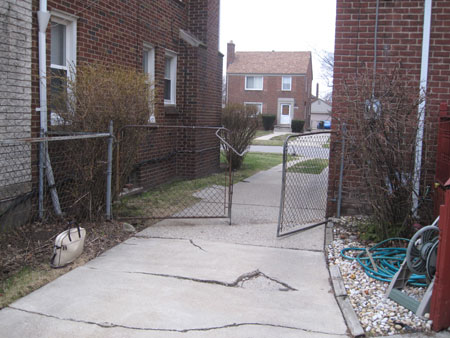 This is the Magnolia tree that was the subject of one of my earliest songs, “I Fell Out Of The Magnolias”.

No one ever released it but it was one of those songs that impressed all of my singer and songwriter friends back in 1974 when I cowrote it with David Lasley (who I would later write “Lead Me On” with) and one of those songs that when I bump into any of them they still sing a little of. Forget about “September” or the Friends theme, “Magnolias” is the classic. Here I am back in the ‘Magnolia” days: 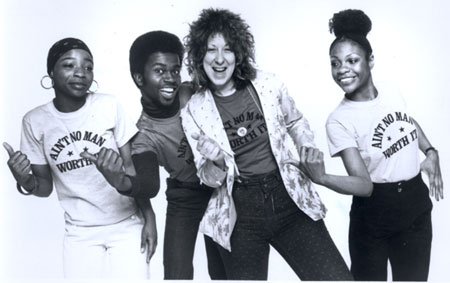 When I first  set eyes on the house I live in now in LA back in 1980, my realtor had heard about it at a dinner party the night before we went house hunting. I didn’t want to live in the Valley but after looking at and hating a bunch of square boxes in Hollywood I decided to drive over the hill and see the house described in the brochure as a miniature Hollywood Palladium. This was a day before it officially went on sale. There was a party going on in the backyard but the back gate was open so I just ran in and raced up the stairs into the house, with the owner chasing behind me. My realtor caught me just as I entered the living room but I remember turning my head and not only seeing a curved wall in the living room that reminded me of a curved wall in the living room on Sorrento but I was dying at the bathroom, just off the living room, because it was filled with gorgeously aged vintage maroon tile. Here’s the bathroom floor as it was that day: 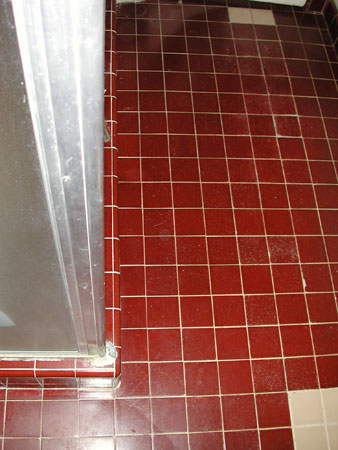 I didn’t know what it was about the tile but looking at it made me dead certain this was MY home. So I almost died when I walked into the bathroom on Sorrento to see the exact same tile there. I had totally blocked it out of my memory but there it was with that deep almost orange hue that only hugs tile that old. 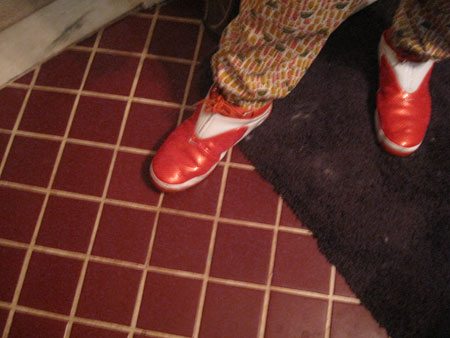 Another unbelievable thing is the people who live in the Sorrento house. First of all, it’s the same folks who bought the house from my father in 1965. Second, their last name is Broadnax, a name I’ve  only heard once before because it’s the name of one of the characters in my musical, The Color Purple, and one of the only characters’ names mentioned in song. As soon as I walked in, the Broadnax’s, both Reverends, told me that my mother, who passed away very suddenly when I was 16, was still in the house. They hear her walking down the steps, and growing up their kids often told them there was a white lady in the house. In my youth, I may not have believed this but when  my co-writers and I first started working on the musical, Alice Walker, author of the Pulitzer prize-winning book, told us that it was all she could do to keep her hand moving fast enough to scribble down the thoughts in her head she was certain her ancestors were dictating to her. The book was written in one quick draft. Alice told us her ancestors would be contacting us. I swear to God, there were times when I would just move my mouth and words or a melody would tumble out, as if someone else was dictating them. It happened to me, Brenda (Russell) and Stephen (Bray) throughout the four years we were writing the show. So I definitely believe that my mom could still be hanging around Sorrento. I hope she was home when I came over. 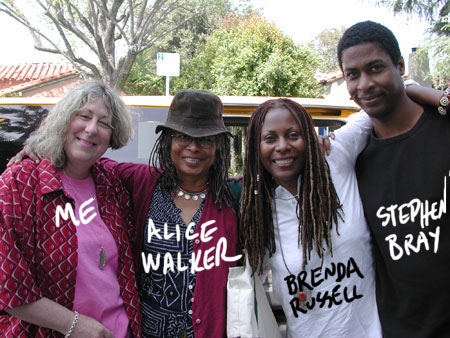 One last little bit of synchronicity, throw in that the person who sang the “Magnolias” song demo was the only old friend of mine cast in The Color Purple, Charlo Crossley, former Bette Midler Harlette and Church Lady Doris on Broadway. She’s been talking about that Magnolia tree for decades now. 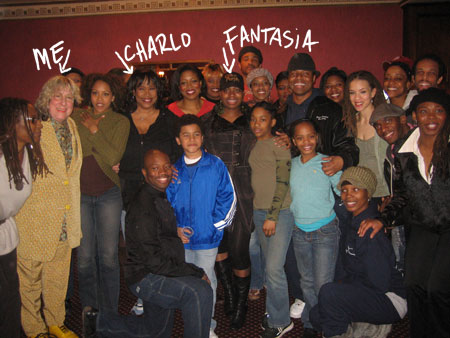 Friday night, the Broadnax’s sat next to me at The Color Purple, where it was playing over the weekend at the Fox Theater.  I totally got a vibe that my mom was there. 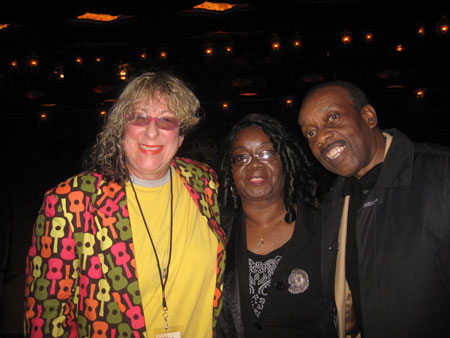 It’s pretty overwhelming to be in spots where you have very specific memories and to see it through adult eyes. Especially for me, as I have so few photos and zero movie footage because all of it got tossed after my father remarried. Which I’m sure is why I so obsessively document now. I don’t ever want my past thrown away again. And now at least I can visit it more often. 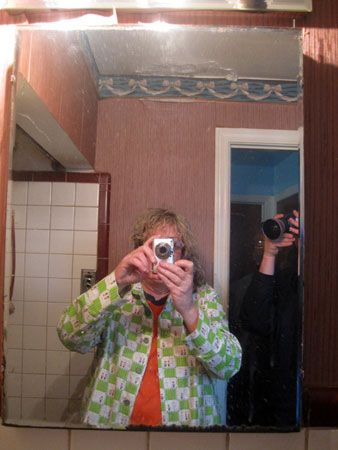