A few months before my songwriting world exploded writing for Earth, Wind & Fire, I wrote about a quarter of Herbie Hancock’s Feets Don’t Fail Me Now album

A few months before my songwriting world exploded writing for Earth, Wind & Fire, I wrote about a quarter of Herbie Hancock’s Feets Don’t Fail Me Now album without even realizing that’s who I was writing with until we were in the middle of our second song. How crazy is that?! Patti LaBelle had heard some songs of mine and flew me up to San Francisco where she was recording and told me that her friend who was also recording there that week needed a collaborator. She never told me who the friend was and I never went into that studio because I was finally with the big fish and that’s where I wanted to stay. Long story short I ended up in the other studio with the friend a couple days later and we immediately began writing to tracks he had already started. It wasn’t until the middle of the second song when he grabbed a phone call and I really had a chance to stare at him that I realized I was writing with Herbie Hancock. One of the most mind-blowing moments of my life as you might well imagine! Here we are reunited about a week and a half ago at Jane Goodall‘s 85th birthday party. Thank you, Denise Avchen, for that most fortuitous invitation! 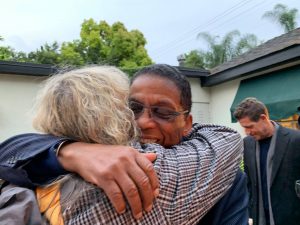 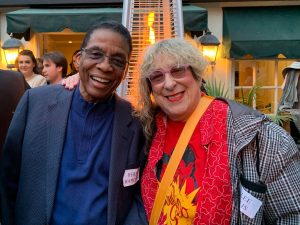