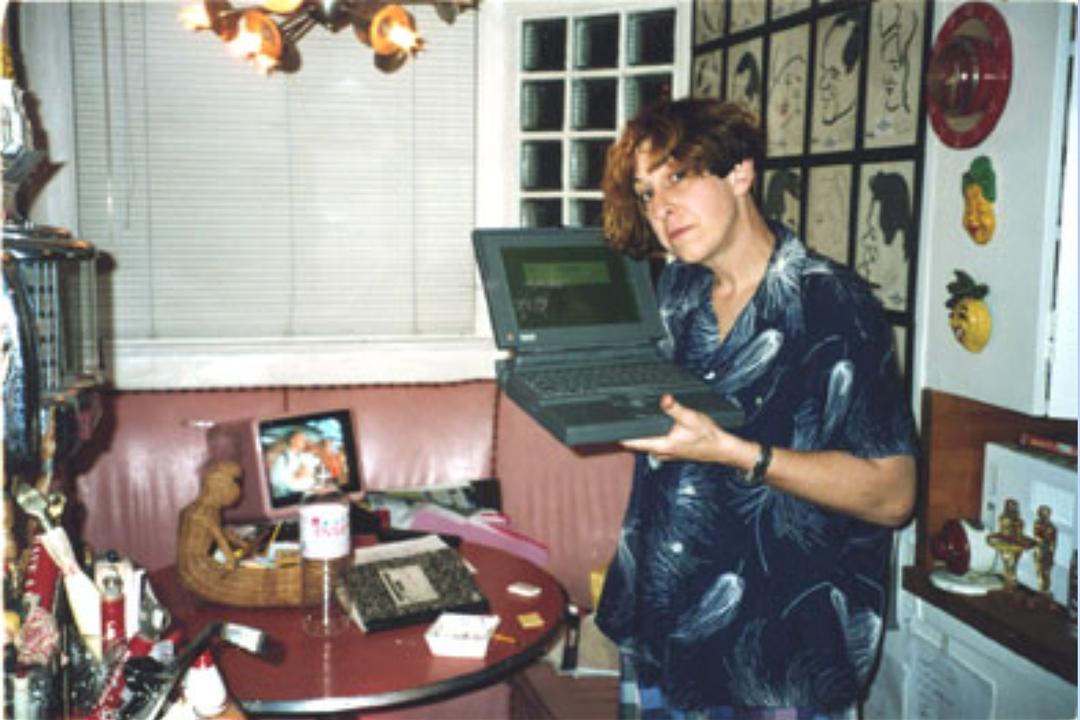 By 1992 I literally stopped doing art and by 94 writing music because I was so frustrated creatively by the limits of what I had to create in order to get my work out there. In addition, it was next to impossible to combine all the mediums I worked in into one artistic expression unless I financed it myself. I wanted to take one idea and write it, musicalize it, paint it, motorize it, throw a party for it, juxtapose hi and lo art (kitsch) and lifestyle. Since my first job I went from advertising to music to painting to sculpture to furniture to art direction and set design for music videos and TV to making short films. Only in the latter and most especially in the parties I threw, did I feel that all my talents and interests came together in one blobbing artistic expression. With the exception of Kathleen Carey, head of Unicity Music, who got me to write with Pet Shop Boys by convincing their manager to fly me to London to paint their portrait, to the art world I was forever a songwriter whose hobby was painting. But to me, my value as an artist was that I was cross media. With the advent of digital technologies and, most importantly, the Internet which allowed graphics in 1991, it seemed to me that linear art forms an artist painting a picture, a composer writing a song with the only interaction from the public being to buy the record or concert ticket – was old school thinking. In the digital age an artist would just create the starting point and other people could participate in actually making the artform as they shared files digitally.

With as much as I loved throwing parties, it also seemed to me that the Internet was the perfect medium to throw a global one on. Inside that party people could create art, music (not just buy it) , send email, shop, meet people, share information and do anything else possible in an online environment, all within one interface. This is all I preached since Digital World 92, the first conference I key noted with John Scully, then head of Apple, and Andy Grove, founder and CEO of Intel, with the heads of Sony and Fox. The few pop artists who were doing anything digitally in 92, 93, Todd Rundgren, David Bowie, Thomas Dolby, Prince and Peter Gabriel, were mostly, with the exception of Thomas who understood it would actually change the way musicians composed music, experimenting with CD-ROMS to expand what they could present to their fans – now not just the song but video clips of them in the studio, bios, lyrics, etc. This became the model for how people thought about new media: use the new medium as a distribution channel for the old mediums. The actual creation of the art itself was still done in the old linear way. The only thing non-linear or interactive was how the user could choose to experience it – let me hear cut 5 before cut 3. let me see this ending not that ending of the film. To this day the model of pasting the old medium onto the new is how the much fabled Silicon Valley/ Hollywood fusion more than often plays out.

In 1993, Prudence Fenton joined me in what I was now calling “willisville”. We were among the first, if not the first pop artists to preach that any thing that could be done in an online universe could happen within one interface – as opposed to doing email, which so few people were doing in 93 any way, and logging! off and going to a different web address to shop on one of the under ten sites you could actually buy anything on. By contrast, “willisville” was a radical approach to interactive entertainment, communication and transactions that merged multiple technologies and platforms into one story driven interface. It was also the first interconnected social network in cyberspace. As opposed to a technology company developing some software and finding artists who painted pretty pictures and pasted music clips on it so that it was an animated singing coffeebean jumping across a page and not just a dot, our idea was to create a story with interactive characters who could talk to you, lead you on the path you wanted to pursue within the story, recommend products you could buy, give you discounts, introduce you to other people inside willisville with similar 2 interests, hold garage sales (pre Ebay by five years), let you record in recording studios and paint on giant canvases with hundreds of other people, all within the shell of an ongoing story that was a fusion of virtual and physical reality. The underlying BIG IDEA was to create the concept of the artform first and then let the users experiment with the technologies and business models to enable it. willisville was the complete opposite of the reigning practice of funding technology and business models and pasting art, video and music clips on top, a model that was doomed to make entertainment on the web look and feel dorky compared to what was state of the art in film and TV. There was great confusion in those days that engineers were, in fact, artists. Not that some of them aren’t, but making something move is not the same as giving it a reason to move and a distinct way of moving that connotes emotion and mood, which is what an artist does. Silicon Valley ran to stars who had no idea about or interest in digital anything and Hollywood ran to tech companies who had no idea what went into the making of actual entertainment, Time Warner and AOL being the classic example of a union that was doomed from the start.

Prudence and I funded willisville ourselves, turning down a lot of potential deals along the way from companies like AOL as we knew, despite how much they said they wanted what we had created, we’d end up having to sacrifice our own ideas and instead draw, animate and write music to give their own technologies a public face. For a couple of those years our third partner was Mark Cuban, the now multi-billionaire who owns the Dallas Mavericks and was the first person to bring streaming events and audio to the web. Between the three of us we couldn’t get arrested. Prudence and I finally accepted funding from Intel from 95 to 96 but were stuck trying to make sense of a technology they funded that allowed you to ‘create’ in only the most stunted way possible. Rather than finding technologies to enable us we were stuck trying to enable a technology we didn’t believe in. Both Prudence and I consulted for AOL, Microsoft, Intel, SGI, Disney, Warner Bros. and a lot of other companies dealing with interactive technologies. But by 1997 it became evident that the quest I was on to discover new artforms in the digital domain was futile. It was soulless existence based on tap dancing for dollars every day and trying to convince executives who were looking for billion dollar buyouts that art not money is what should be glorified. The miracle of all this is that I stopped doing linear art and music because there was no space for me to create what I wanted and it took trying to create new artforms in a digital domain for me to run back screaming to those exact linear mediums I had abandoned years before. I could have never predicted that my interactive years 2 would have enriched me so much as to be able to explore and execute linear mediums with such renewed spirit, vigor and ideas. All of which brings me to The Color Purple and beyond today.