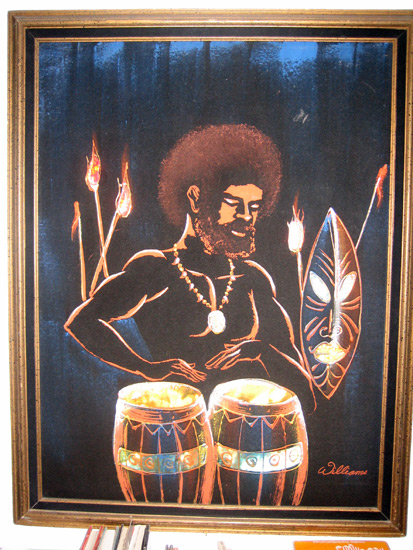 Here is one of the top two items in my kitsch soul collection as measured by the number of people who have said they would pay anything if I would sell it to them. Which I firmly won’t. I got this at the Pasadena City College swap meet in 1991. 34″x44″ of black velvet lusciousness that works on every conceivable kitsch soul level: 1) Black velvet! 2) Music, most specifically congas, the impresario of kickback recreational instruments, 3) Tiki, 4) it’s lighted – and made of Christmas lights encased in scrunched up tin foil to boot, 5) can’t tell if it’s tiki torches or pussy willows but either is fine, 6) the peace movement, 7) the massive male head compared to the small, delicate feminine hands. The artist signs “Williams”. A few years ago a friend found me an unsigned Williams. There is no question that it’s the same artist. The big head/little fem hands thing, the way the nose is created by empty space. Calling all Williams if you know of any others in existence.

I am speechless with wonder at the wonder of it all. Inspired by this masterpiece of cloth and paint I attempted my own velvet renderings<> in 2000 for my Media Rare Art Exhibit. The black velvet attracted too much paint and I was sickened at its effect. Thankfully so as I was able to part with with the masters when one of my most active patrons, Ms. Gail Zappa, wife of Frank and madre to the beloved Dweezil, Moon, Diva and Ahmet, purchased the set. 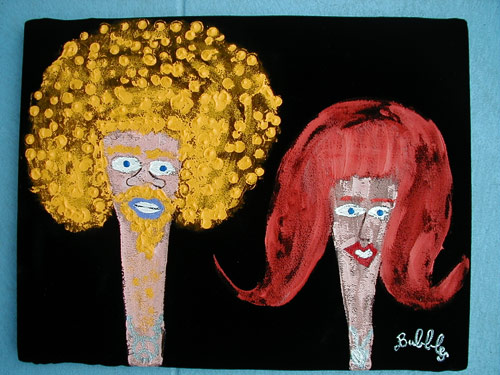 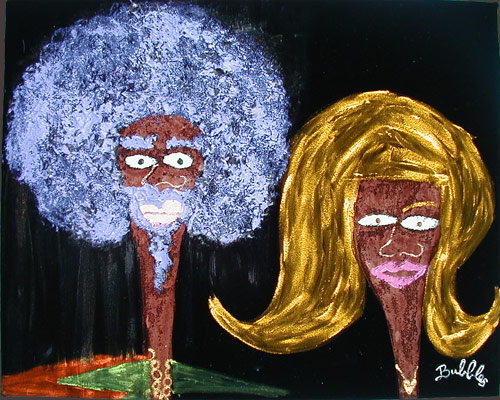